Translation on the first novel completed!

Finally it’s done! And thus a new chapter on my homepage starts.

When a child dreamed the first of all human dreams, Gar’Erui the world beyond the veils came to life.

Human hopes and desires filled the newborn realm with all kinds of magnificent and cruel entities, resembling the best and the worst of mortal souls.

No one knows that better than Fenia. Raped and tortured she reappears in the human realm four years after she was supposedly killed by the boy she loved.
Where she has been, what has happened to her remains a mystery to family, friends and the police, for not a single word slips her tongue.

Only Dave, father of one of her classmates, can draw a connection between her disappearance and his own story. He realises what must have happened beyond the veils since he left:

The magic world is doomed to fall to the all-devouring Shadow, unless the ancient spell is woven again and the redeeming Star of Erui is revealed.

The journey starts with the return.

A year from today I made my decision.

My epic fantasy novel „Der Stern von Erui“ had been on the German bookmarket for just two years yet already had ignited thousands of minds and souls.

Feedback from my readers was overwhelmingly positiv and thus encouraged me to dare the unthinkable: Investing the money I had earned so far to get my Star out into the world available for so many more people who longed for strong and meaningful fantasy stories.

What next, when you can get it and how and who was involved I will tell you in some later posts and articles for it was quite a journey for me as well. For now I hope you will enyoy the synopsis and the new coverdesing as much as I do, and if so: Spread the news! 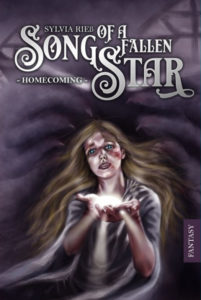